The relationship is in the subtext.

Yes, my friends, we do know; subtext is everything.

Yuri!!! On Ice (hereafter simply Yuri on Ice because I’m tired of the exclamation points) is a sports anime with romance and heart. You’ll be laughing one moment and holding your breath the next watching our skaters progress and their various relationships develop. The beautiful skating, perfect characterization, inter-episode connections, and riveting yet simple plot advancement are topics of a “Let’s Talk About” post of their own, but today I want to discuss what was, for me, at the forefront of this show. I simply could not wait to discuss what I saw in the relationship between Victor and Yuri.

Please keep in mind that my observations and assumptions are simply that: mine. I don’t promise to know what the creators intended, but rather offer my own interpretation. In addition, I take some liberties with the romantic preferences of our characters, and these are considerations that I hope a second season DOESN’T clear up, because I love that viewers are able to clearly ascertain the bigger picture through visual and verbal subtext. The expertise in which the show executes this point is some of Yuri on Ice’s biggest appeal.

From this point forward, I may state my opinion as fact in the interest of simplicity. In any case, to understand the main characters’ relationship, we must first examine how they see it themselves.

Yuri doesn’t see himself as a gay man.

He understands that what he feels for Victor is love, but he hesitates to place a label on its type, and that makes their relationship all the more intriguing and, honestly, beautiful.

That Yuri isn’t attracted to Victor is a lie. I think that Yuri’s admiration of Victor has straddled the line of “crush status” ever since Yuri was a child, and in the earliest episodes, Yuri becomes a blushing, panicking mess whenever Victor becomes too physically close to him. Yet, observing this, we can also clearly see that there is always something holding Yuri back from eros outright.

Yuri has never had a straightforward, romantic relationship (or even a complicated one as of the series’ beginning), and I think this contributes to his discomfort around the idea of romance. He’s been focused only on Victor for so long that—between this and his skating career—I don’t think he’s had time for other involvements. Minako mentions outright that he’s never had an easy time making friends and hasn’t had many of which to speak. He’s never considered his own romantic feelings or what he wants beyond the ice. Now that Victor is here with him, he’s in awe.

In the beginning, Yuri has to picture a pork cutlet bowl (brb, dying) to skate his eros, but that inspiration rather quickly becomes Victor. “At first I didn’t know who I was dancing for,” he says in episode 3, “but now I do.” 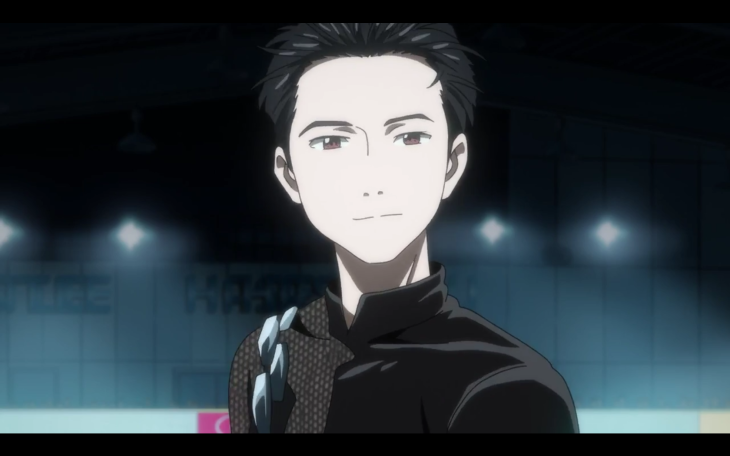 He decides that he needs to be the beautiful woman who seduces the playboy, and there’s nothing funny about the atypical role he takes in his interpretation. Victor is the “playboy,” his more worldly hero, and Yuri’s going to do what he must that Victor might believe he’s worth the effort to coach. He finds power in the role he’s chosen. He finds strength in a role often considered that of submission. “I’m better than any other woman out there,” Yuri thinks, “and now it’s time to show him why.” Let no one mock the beauty in Yuri’s determination nor the innocence in his sexuality. 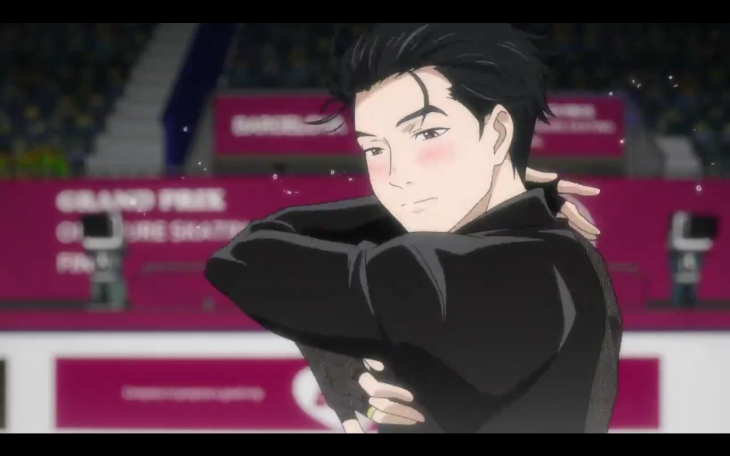 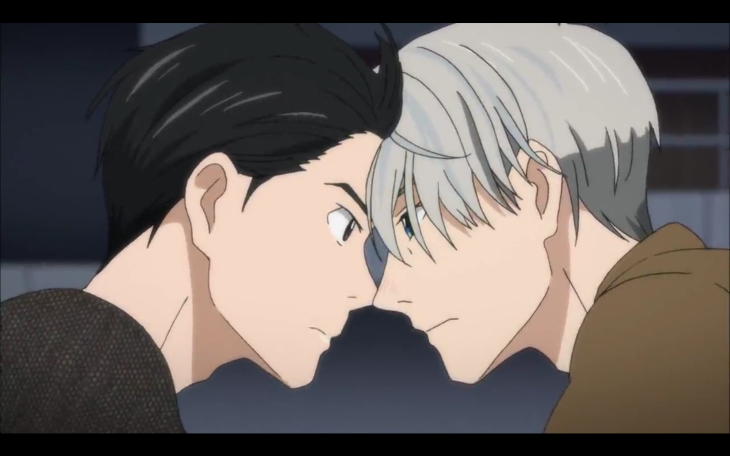 The relationship between the men continues to grow, and yet remains fairly ambiguous for a time. What becomes clear early on is that Yuri is skating for Victor, and that Victor can’t look away. 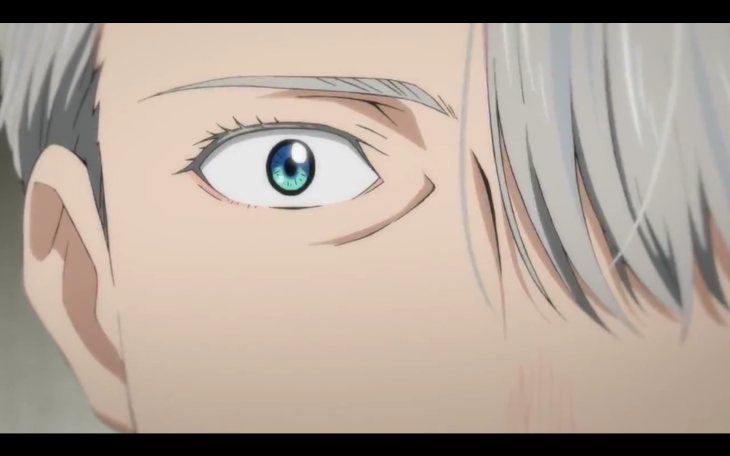 When congratulated about the marriage that wasn’t in episode 10, Yuri becomes FLUSTERED, babbling about how, to quote him, “it’s a good luck charm and a thank you and, you know, there are layers, yeah, layers!!” Victor takes this in stride, seeming much more comfortable with relationships and general romance/sexuality, and claims that they are engagement rings—that the real wedding will take place after Yuri wins the gold. (And a beautiful twist in focus occurs as the other competitors suddenly have an, “Oh, yeah??” moment. Priceless. Classic Victor. ❤ This leads us to other questions, but I digress…)

Yuri isn’t envious of Victor’s relationships with other men and women unless they have to do with the ice, and even as the ending dawns, Yuri has yet to put a word on his love—the “something like love” for Victor that has permeated an entire skating season—and that’s okay.

All Yuri wants is for Victor to be…Victor.

Early on we learn of Yuri’s feelings and we watch them evolve along with the skater, but what of the more ambiguous abet generally light-hearted older skater?

Victor, too, doesn’t necessarily consider himself to be gay.

I don’t think he considers himself anything, really, because in his mind, what is there to consider? I have a strong suspicion that, for Victor, love and gender have little to do with one another, whether or not that love is romantic. To Victor, I hypothesize that sexual preference isn’t something one MUST determine because orientation doesn’t matter. Gay, straight, man, woman: these things simply are, and all are accepted. He clearly has competitors and friends of all persuasions.

Based on hints indicated in the series, I’m fairly confident that Victor has had romantic (or at least sexual) relationships with women in the past. I’d be unsurprised if he’s had experiences with men as well, but I tend to think that his preferences lean toward women based on small comments that he’s made when speaking with Yuri, though of course I’m hypothesizing. (He may just be assuming that Yuri is straight.) His straightforward questioning of Yuri as to what kind of relationship Yuri desires is indicative. He says “lover” without batting an eye and says that he’ll try to do his best. I don’t think he’s jesting. I think he’s willing to be whatever Yuri needs right now, because their relationship means that much.

Victor, I assume, realizes early on that Yuri has some complicated feelings for him, that their relationship goes beyond that of a coach and his skater, and yet—partly due to his own flamboyance and flippancy when it comes to sexuality and/or body boundaries—we don’t get much insight into his own feelings beyond that, from the moment he first saw Yuri skate his own former routine, he has been mesmerized; since the moment he lounged on his couch watching Yuri’s accidental accent into YouTube sensation, he hasn’t wanted (been able?) to look away. We as the audience are teased, sure, but we’re outright given nothing else. Even the infamous kiss can be taken a number of ways based on Victor’s personality.

That is, until the final episodes. In episode 10, everything changes.

“Yuri,” Victor thinks as he looks into the setting sun, “you may not realize it, but many people have learned something about the L-words from you. I’m not the only one, not by a long shot.” Everyone crossing Yuri’s path has learned a little about love in one of its forms or another—including Yurio—and Victor is no exception.

Also in episode 10, aside from the talk of the marriage that wasn’t, the audience is treated to tales of Yuri’s drunken escapades. These seemingly throw away lines are expanded upon during the end credits (at which’s still images I laugh and scoff “dear Lord”), and we’re given a real glimpse of Victor’s first show of emotion toward Yuri. Unexpectedly, we see that Yuri triggered… something… something special in the usually unruffleable Victor long before Yuri’s rise toward YouTube prominence.

“Victor!” the intoxicated Yuri insists. “My family runs a hot springs resort. When the season’s over, you should come visit. Hey, I got an idea. If I win the dance off, come to Hasetsu and be my coach! You’ll do it, won’t you Victor?” 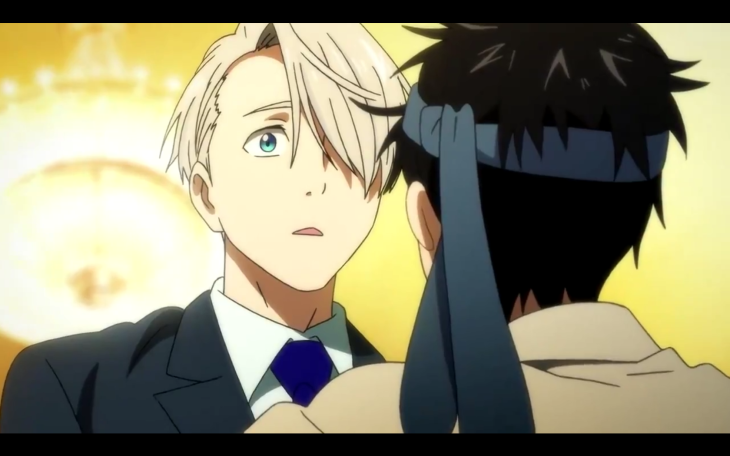 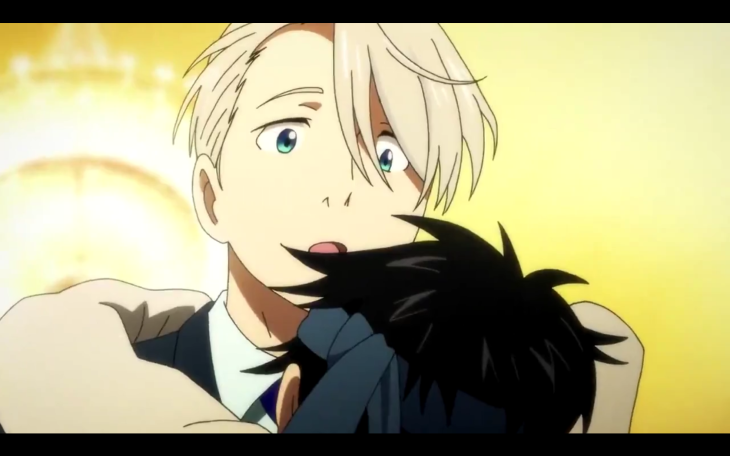 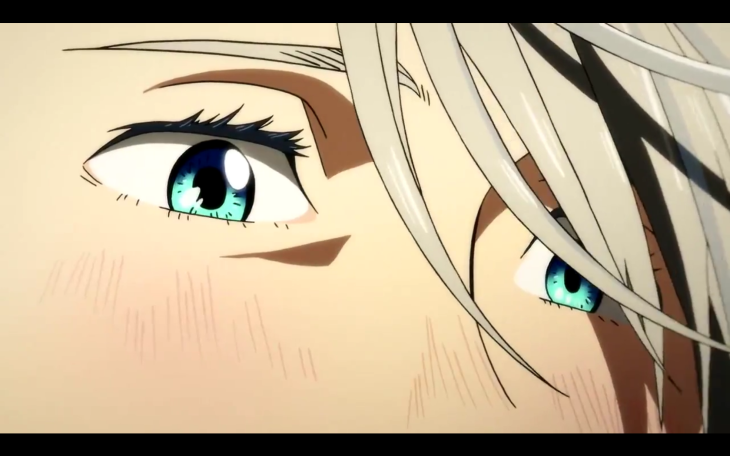 That blush says everything that his words have not.

Victor’s feelings become more abundantly clear with his tears in episode 12. At the thought of the imminent termination of their skating partnership, Victor loses composure. 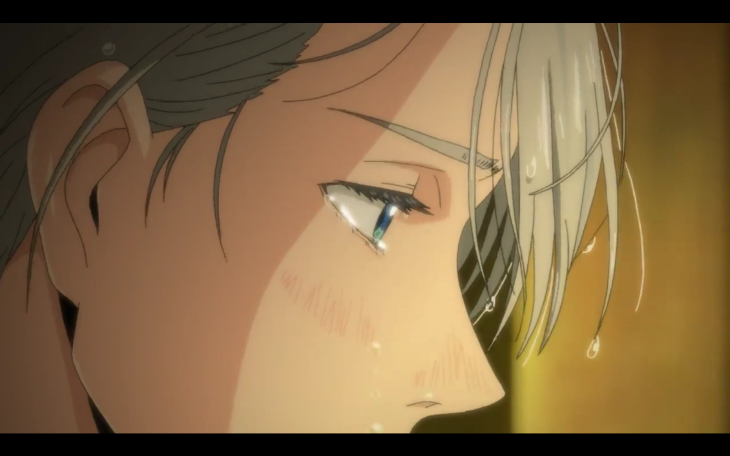 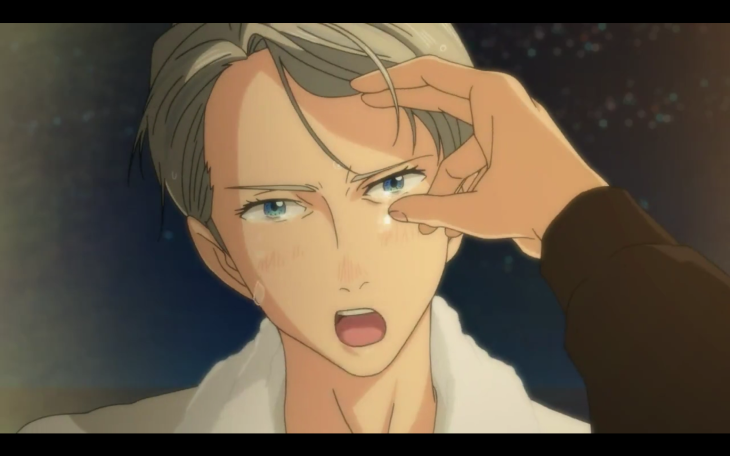 I don’t think that Victor loves Yuri from the word “go.” I truly think that, for the senior skater, it’s something that develops gradually as he sees Yuri skate, watches his passion unfold, and finds himself captivated by Yuri’s innocence.

Yuri idolizes Victor, but he also wants to some day best him. He lets this pipe dream slip to Takeshi. Victor insists that he wants Yuri to take at least five gold metals during the next skating season, but still plans on making his own comeback as his competitor, and we all know that Victor loves the gold.

Yuri and Victor are…best friends? competition partners?…in a lot of ways, and in some ways they are…more.

“The time to seduce me picturing pork cutlet bowls is over,” says Victor with a soft look in his eyes. “At this point, you can do it just by being yourself. You’ve figured that out by now, haven’t you?” 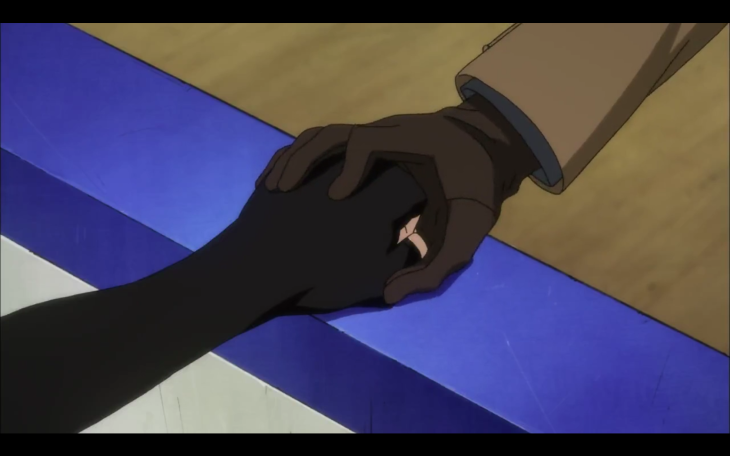 For Victor and Yuri, love is encapsulated on the ice. 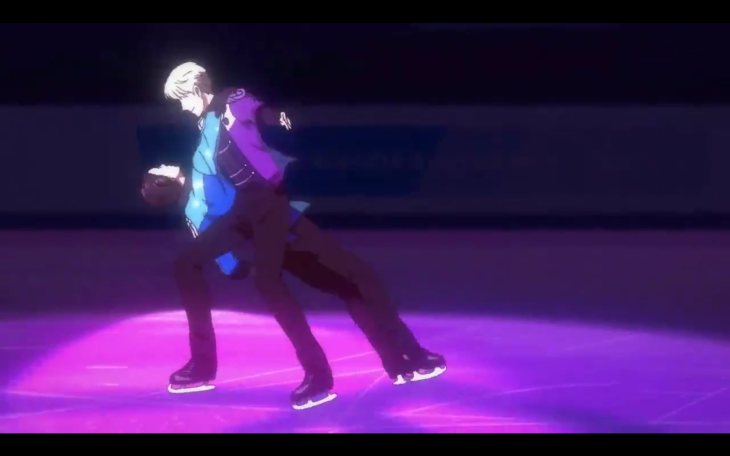 So, in answer to my question, “Is the love between Victor and Yuri that of agape or eros?” I must sound a simple…

I hope to discuss more about one of my new favorite anime titles. What do you think about the relationship between Victor and Yuri?

24 thoughts on “Victor’s Blush Means Everything (A Late to the Party “Yuri!!! On Ice” Post)” 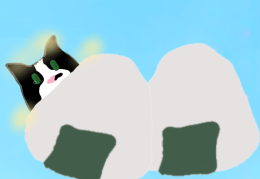 Most Popular on the Blog