Embracing BL (not yaoi which is different and not my thing, personally) as an anime genre made available new titles for my viewing pleasure, not the least enjoyable of which has proved DRAMAtical Murder (DMMD). However, for all the scandal of its source material (more on that later), the anime itself is tame in both terms of general romance AND, well, specifically love between boys.

Yes, you heard it here. If you ever wanted BL anime without any of the BL, DRAMAtical Murder is the title for you!

Perhaps I’m being a touch harsh. Honestly, I really liked DMMD, but my reasons for liking it did not include romance. There is, of course, undertone–one of the many potential marks of a BL as opposed to a yaoi–but this undertone is significantly milder than that of its counterparts in the genre. The undertones in this show more closely align themselves to something like Cheer Boys than something like No. 6.

Before I get any further down the rabbit hole of DMMD, I should provide a plot synopsis as taken directly from HiDive:

“When Aoba Seragaki is drawn into the shady underworld that surrounds the virtual game Rhyme, all he thought he knew falls apart. There are gaps in his memory, people are disappearing, and a buried secret in his mind may hold the answers.” 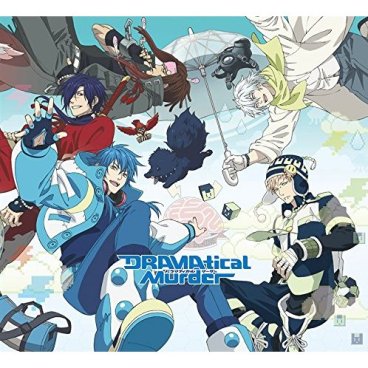 Okay, maybe we need one from MAL, too:

“Some time ago, the influential and powerful Toue Inc. bought the island of Midorijima, Japan, with the plans of building Platinum Jail—a luxurious utopian facility. Those who are lucky enough to call it home are the wealthiest citizens in the world. The original residents of the island, however, were forced to relocate to the Old Residential District; and after the completion of Platinum Jail, they were completely abandoned.

‘Rib’ and ‘Rhyme’ are the most common games played on the island. Rib is an old school game in which gangs engage in turf wars against each other, while Rhyme is a technologically advanced game wherein participants fight in a virtual reality. To be able to play Rhyme, you must have an “All-Mate” (an AI that typically looks like a pet), and the match must be mediated by an ‘Usui.’

Aoba Seragaki has no interest in playing either game; he prefers to live a peaceful life with his grandmother and All-Mate, Ren. However, after getting forcefully dragged into a dangerous Rhyme match and hearing rumors about disappearing Rib players, all of Aoba’s hopes of living a normal life are completely abolished.”

Okay, so back on the BL-that-isn’t-a-BL train, I can’t say there weren’t moments. I can’t say that Aoba wasn’t the damsel in distress (in a totally great and not derogatory way, mind you) that the other dudes needed to physically save while he saved them emotionally. Like, it was totally a thing, and in all genres, it’s my sort of thing. Take for instance when Koujaku had to burst in during this retrospectively sexually creepy moment. 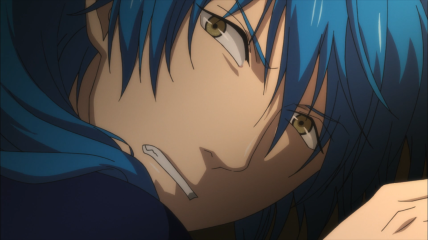 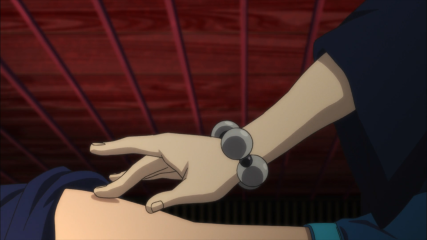 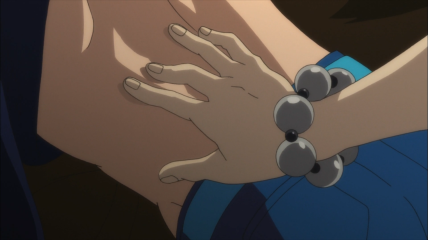 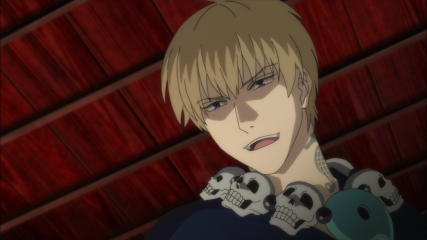 I say retrospectively because, while I knew it was totally creepy, I don’t think I realize just HOW creepy until I watched it again to grab the screenshots. Anyway, without giving away too much, Koujaku storms in and FLIPS out, quite rightly I might add. He is very concerned about what the tattoo artist might do to Aoba, and the subtle indication is that he doesn’t only have to worry about any (mild spoilers–cursed) tattoos Aoba might receive. The show loves moments like this, because Aoba and his power (no spoilers) had a very Yuki from UraBoku feel to them, and I appreciate it, but the show lacks the Luka-Yuki love story vibe that I’ve come to expect from BL, and while I don’t regret it, it isn’t going to meet your expectations if you’re looking for romance.

All of that comes off as a tad surprising when you consider that the source material is an R18 yaoi PC visual novel that has already had a 15+ edit created for Vita because it was just TOO violent/sexual. Seems like studio NAZ was so concerned about keeping it PG that they totally took out the romantic aspects of it, but that’s just my supposition.

Anyway, the main characters are great in both visually and personally (not to touch on the extended cast). You’ve got:

Mizuki, a passionate tattoo artist/rib gang leader who is bffs with Aoba and Koujaku 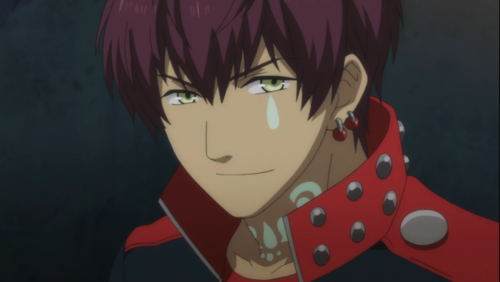 Koujaku, the husbando (!!!!) and slightly more violent rib gang leader/hairdresser with a dark secret and heart of gold who as known Aoba since childhood Noiz, a stoic, surprisingly endearing hacker and rhyme player with a unique sense of style 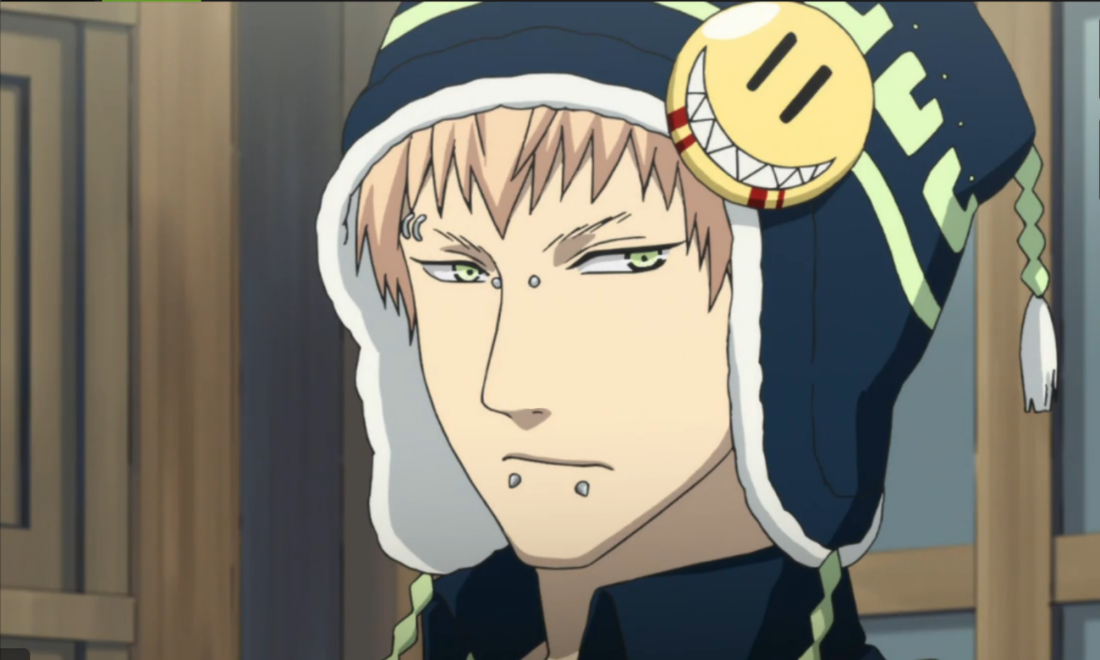 Clear, a quirky, jellyfish-loving, child-like (NO SPOILERS) who always covers his face, 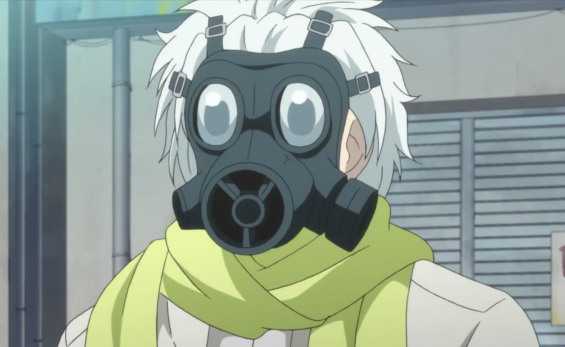 Mink, a former convict and Native American whose tragic backstory does help explain his inapproachability, 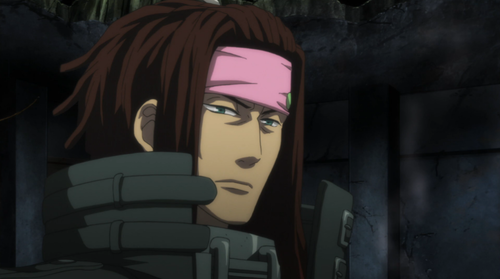 and Aoba, the main character who I can’t reveal much about here because MORE SPOILERS. 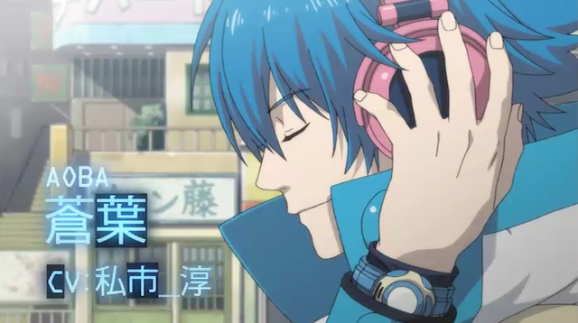 You’ll notice that the characters are bright and boldly designed. This entire show is lovely to look at because of its strategic use of saturation and color choice. The backgrounds, even in the dark moments, still convey that vaguely comic-book saturation and feel, rendering them beautifully composed. I don’t know how many people have looked at it from that angle, but once you do, I think you’ll suppose that they’ve managed something intentionally.

Moving on from that, the plot had holes to be filled by the game, but if you’ll remember, those come part-and-parcel with otome-based (and by extension, BL visual novel-based, I assume) titles. Many questions are left unanswered and avenues unexplored. Though they aren’t handled with the grace of say Norn 9, these missing pieces don’t bother me because I’ve come to accept the genre for what it is, warts and all. If those pitfalls bother you, however, you’ll find DMMD frustrating, I’m sure. Truly, it isn’t a show for everyone, and that’s okay. All in all, things wrap up nicely, and I’m not left wanting for a season 2. I won’t rehash the Yuki-from-Uraboku-ness of Aoba as an MC and I won’t harp on all the “damsel in distress” or “emotional savior” moments because I’ve mentioned them briefly before and the point is just that those moments are present. They are numerous and enjoyable if you like that sort of thing; one way they could have been better was to add MORE drama and romance, but I won’t complain too much because, for a show I’ve described as barely skimming that BL line, it’s about what one might expect when hearing that description and bereft of the moniker “sports anime.” I wasn’t super excited about the sci-fi based plot having read the summary, but it actually was pretty darn interesting of a setting and it worked well.

But I should mention that I learned something. Kinda like how in Banana Fish they make every bad guy a rapist against the odds, what are the odds that every dude in Aoba’s friend group happens to be gay? (NOT equating the two, mind you.) Like… those are long-shot odds, guys. It’s just as unrealistic as every male in a reverse harem being interested in the female MC, and I understand now it’s a genre that I didn’t know about: BL harem. So, worth noting. New genre.

After watching the series and in the course of writing this review, I watched the DRAMAtical Murder OVA. Please heed my warning that to do so is to invite a very different sort of experience. The OVA takes DMMD from PG13 friendship between men that’s “skimming the lines of BL” to flat out R18 yaoi (obvious if not visually explicit–though I suppose that’s arguable, but my point is there were no genitals–sexual content) and from vaguely violent to straight up horrifying. It depicts without preamble the game’s main bad endings, which include [spoiler warning but this is an important warning] both sexual violence and decapitation. I don’t know what I expected when I started watching it, but that wasn’t it. Like, after how tame the series was, I wasn’t worried at all, but I should have been because… man. Wow. I’ve seen things now. *gazes off dramatically into the distance* But seriously, I personally should have turned it off when I realized what it might contain. But here we are.

Like, why would you remove all traces of romance from the BL title if you’re down to include such graphic content in the OVA?? I… am confused??

So, anyway, I definitely don’t want to play the uncensored version of the game (not that I did in the first place, mind you), but now I’m more hesitant about the censored version as well. It’s getting ported into English sometime in the near-ish future (confirmed), so you guys will have to make any gameplay/viewership decisions for yourselves.

You can watch DRAMAtical Murder on dubbed (the way I did–the voice acting was GREAT) and subbed on HiDive. You can also watch it subbed on Crunchyroll.

So… has anybody seen DMMD? Thoughts? See, now I get why so many in the Twitter pole wanted a review of this title from me as that OVA is far from my usual fare.

6 thoughts on “If you ever wanted BL anime without any of the BL, “DRAMAtical Murder” is the title for you! (sub/dub)”