I’ve decided that Day 1 (which is the same in every route, both casual and deep) is designed to weed out the weak, as it were. I set 17 MysMess alarms last night! 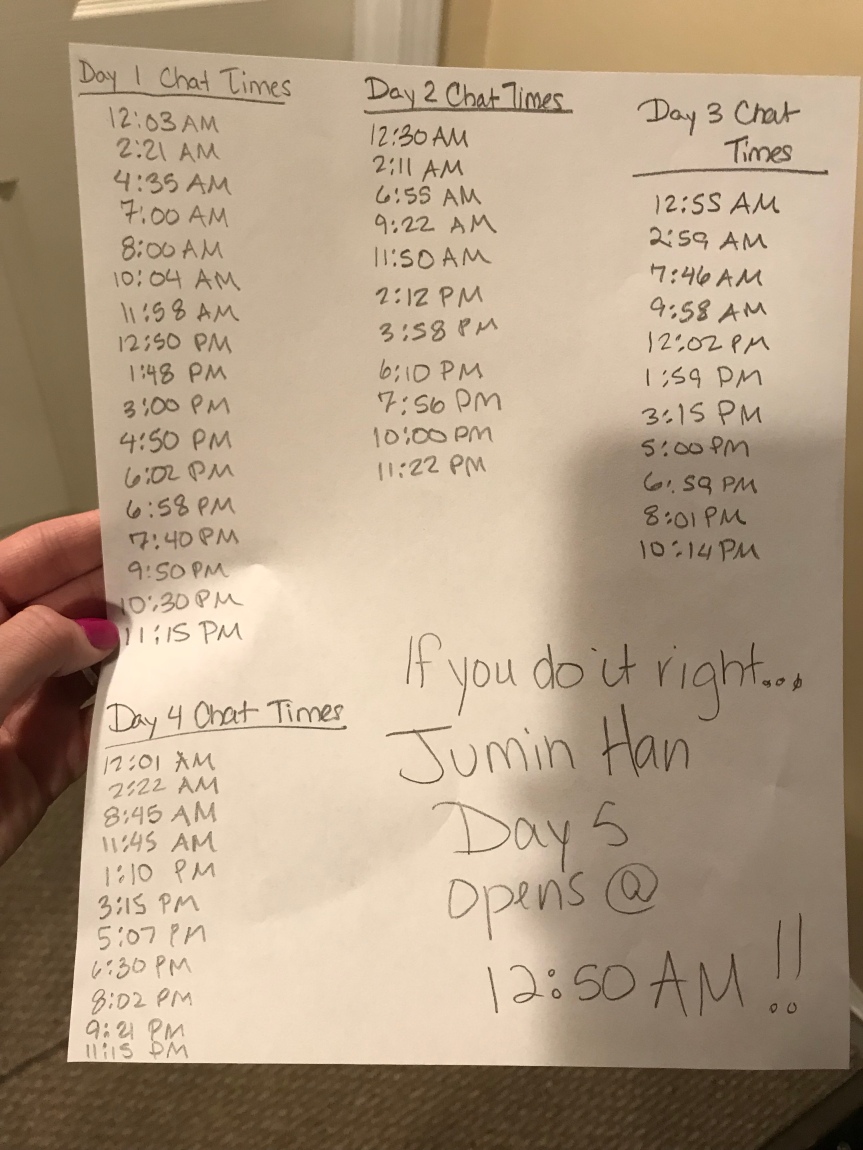 This when compared to the usual 11-ish alarms necessary for the following days casts a harsh light on a cold truth: MysMess wants to wear you down quickly before they give you any sort of significant break (read: more than two hours of uninterrupted sleep each night).

I was exhausted waking up at midnight to begin the game, but it seemed that each subsequent wake up call became easier and easier. The timing also brought me out of several less-than-pleasant dreams, so… thank you, Cheritz?

I am, as a matter of course, electing to respond in ways I don’t usually choose. I can’t decide if new options open during new playthroughs, or if I simply forget the options existed in the first place:

I would also like to point out that the thought of “Unknown” making it up to me when he returns from Korea is terrifying, so how about we don’t do that, yeah?

Jumin hits hard right off the bat, and I won’t lie… it’s an attractive trait, yes? Abrupt when necessary?

And it’s time for the biggest announcement in all of MysMess Hell (not really); are you ready??

I know who Unknown is. I don’t know anything about him (please don’t spoiler it!!!), but I know /who/ he is because I was spoiled by cosplayers at AX2017, and—without revealing anything—it makes me find Seven’s somewhat mocking/somewhat serious religious nature… interesting.

I haven’t played since Cheritz updated the RFA app’s user interface. While I might miss the old just a bit, I tend to like this update!

And, of course, dear Jumin speaks to the soul as one night expect.

My alarm 🎶 this session is set to “At the Beginning” from the movie Anastasia, and as it has just gone off again, I think I’ll bounce over and see what’s up! Until later! 👋🏻

I’ve been out shopping with my mom for a few hours, and the headache is building. Here’s hoping is passes quickly, because I won’t really be able to “sleep it off” if it elects to hang around for any length of time. This far, I’m meeting the challenge well, though I’m quite exhausted already. Maybe I should have given myself some recoup time from a busy month at work before jumping in, but that’s in the past now! Onward to victory!!

Well, Day 1 end in a few hours, so I’m off to schedule more alarms! All I’ll say is that if Rika is an alien…

Well, you didn’t hear it from me.