Have you ever felt the need to see Attack on Titan acted out in dance? Well, now you can, thanks to this video posted by VIBRVNCY of the 909 Hip Hop Dance Troupe performing The Survey Corps | Ultimate Brawl XIV 2014. This stunning dance performance takes the audience clearly from the beginning of AoT season 1 until just after the walls were breached a second time by the colossal titan.

What can I say, I’m a sucker for dance interpretations of anime. There’s something about a talented group who spends so much time and effort to emulate an anime they’re fond of that I can’t help but admire.

What do you think of dance cosplay performances? Let me know in the comments below! 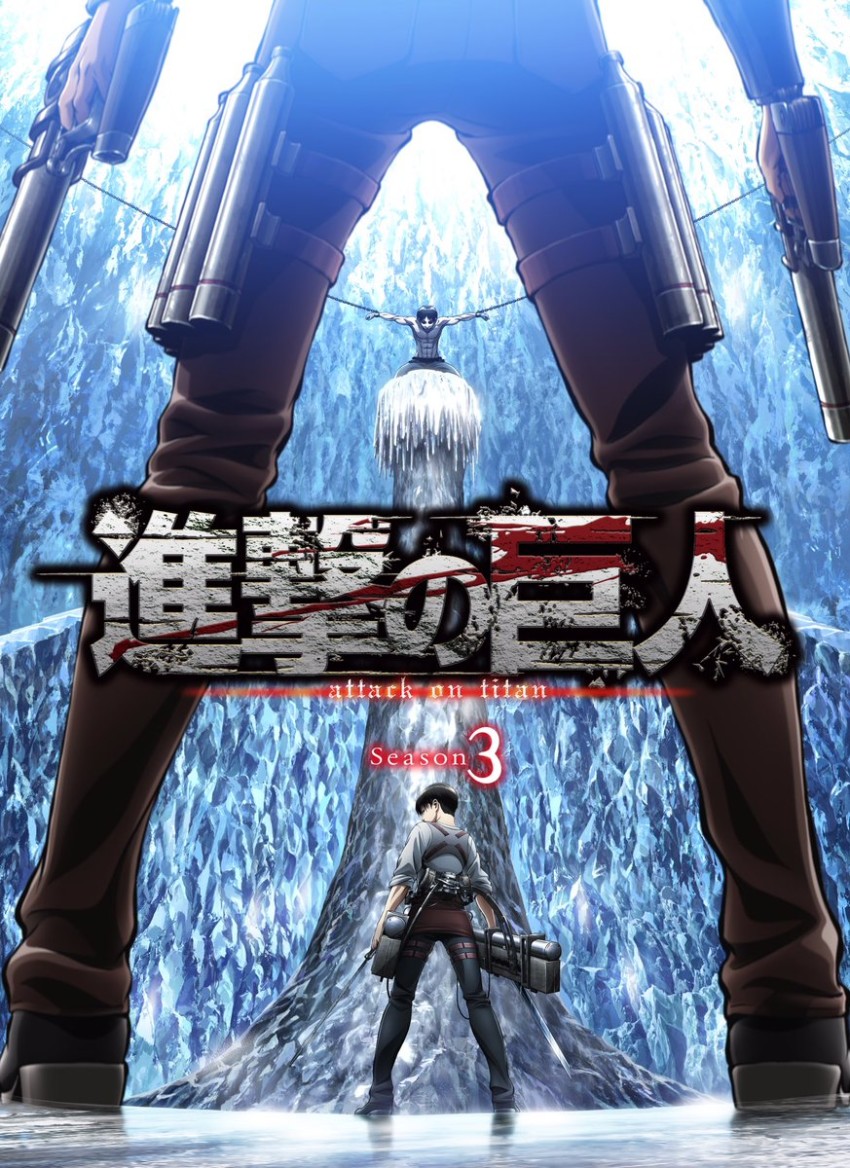 [Attack on Titan is rated R – 17+ for profanity and violence. Please be aware before watching the title.]

I went around and around regarding how I should begin this post; it seemed like a specific hook was necessary, something fantastic and interesting yet seemingly light-hearted that would draw readership to my narrative with a smile and shake of the head. “That’s Shoujo,” they would think. “Forever of that peculiar fashion.” However, it occurs to me that such an opening can’t hope to equal my experiences with Attack on Titan, and I shan’t do said experiences the disservice of watering down something that was, for me, such an altering piece of media.

I knew enough as I began. Enter our antagonists: enormous, humanoidal “titans” that feast on human flesh. There are soldiers that fight against them. Humanity is ensconced within a walled fortress, but one day that wall is breached. The main character himself (highlight for spoiler) –> turns into one of these giants. And on it goes.

What I didn’t know was the complexity of the narrative, nor just how far humanity would be wiling to go to save itself from utter annihilation (or, conversely, to delude itself regarding its own fragile safety). I did not know about the heartless abet necessary design that went into the concentrically ringed city. I did not know about the mystery surrounding the walls, nor the wall-worshiping cult, nor that titans and their origination remained a mystery to the humans. I did not know that these blood-thirsty beings consumed humans not out of necessity, but pleasure.

And I think that, in the end, it was all of these things that I didn’t know that had me sticking with AoT through a three-day, working binge-watch to the detriment of my sleep schedule. I needed to uncover the truth behind Eren and the truth behind their world. As I’d reach a probable closing of one knowledge gap, another would reliably spring in its place. There was always a cliffhanger, always more to see. It was a portrait of “humanity in peril.” And I loved it.

The blocking, atmosphere, and mise-en-scene were well planned within a fully believable (abet fantastic) setting reminiscent of a long-since-forgotten Europe. In addition, the art style and execution was interesting from my first encounter. As I watched, I could not tell if it had streamlined itself into something more common, or if I had simply grown used to its unique line work. All in all, I felt that the style really fit the work as a whole, and I was incredibly pleased with it. The voice casting (I watched the dub) left nothing desired. With Bryce Papenbrook behind Erin Yeager, Trina Nishimura behind Mikasa Ackerman, and our beloved Josh Grelle (who is the nicest guy in person!) as Armin Arlert, I was taken. When one added the talents of voice actors like Matthew Mercer and many others (Caitlin Glass, J. Michael Tatum, Vic Mignogna—no this isn’t Ouran!), the casting came together seamlessly. In addition to these old favorites, I’ve now been introduced to countless new voices as well!

(As a side note, Josh Grelle also narrated AoT, and he did so in what would later become his Katsuki Yuri voice, so if you think THAT wasn’t a shock to my system, think again.)

(Also, if someone writes a good AoT and YOI fanfiction crossover, I’ll read that so fast! Who doesn’t want to see Victor and Yuri dropped into that kind of world?!)

There was never an episode that lent it self to series abandonment. Each new encounter with the media was a rush of emotion and sheer desire to know WHAT HAPPENS NEXT? I’d heard Attack on Titan criticized for its lack of human bonding and relationship, but I didn’t see such a flaw present in any capacity; what I did note was the formation of multiple relationships occurring both subtly and overtly in the context of a species-extinction level catastrophe. While I’m willing to debate the point, I feel that the argument against these formations and preservations holds no ground.

Attack on Titan was an analysis on the perseverance of human spirit through one of the most horrifying, dehumanizing scenarios possible. It was a look into our greatest, unborn flaws and strengths.

I personally can not wait for season 3 coming out in 2018, but I’d like to hear from you.

What do you think about Attack on Titan? Let me know in the comments below!

It was my love of Attack on Titan that partially motivated me to jump into Tokyo Ghoul.

[Full Disclosure: I am now using Amazon Affiliate links. (Maybe I can pay for hosting fees!) This means that if you click the ad images at the end of this post (see below)—each of which I’ve selected to be applicable and relevant and maybe I even own it, I promise—and then buy said product (or any product after getting to Amazon, honestly), I will make a little money.]

I was kidnapped yesterday, my friend Ginger bought a wedding dress, I’m eating onigiri over my lunch break, and this challenge post is late.

I blame Attack on Titan. But wait, you say. I finished AoT two days ago? Yes, you’re right, but it is what it is. Allow me to explain, dear readers. I beg clemency.

I did indeed finish AoT two days ago.

However, the subsequent exhaustion from my utter lack of sleep (#NoRegrets) left me knackered.

I like to keep my challenge posts written just a bit ahead of time to help manage unforeseen circumstances like abduction, but I couldn’t pull myself away from AoT for those three days, leading my small cushion of posts to deplete rapidly. Thus, I was not behind, but I had reached the point of writing my challenge poss daily without room for error.

Perforce, I had planned to write this post yesterday evening, but I was abducted after work by my dear Ginger, who informed me in no uncertain terms and at the shortest possible notice that she was buying a wedding dress, and was I coming or not, woman?

Thus, off we went.

Ginger (I almost just typed her real name!) is getting married in April, and one highly emotional decision later, we were eating dinner at the Chinese restaurant that we used to frequent some time and space ago. By the time we finished catching up, it had gotten to be firmly evening, and I still had to go home and finish up a few things. Suddenly, I was exhausted. At about twenty until nine, Husband and I hunkered down on the couch for a bit, but whereas he got up (and covered me up and kindly put my almost-untouched-minus-two-sips wine glass in the fridge), I did not, falling quickly into dream land to be woken when he found himself ready for bed several hours later.

So, clearly Attack on Titan has it out for my 30 Day Character Challenge. But now on to the feature at hand.

It’s after work and I’m home now! Let’s get to the topic at hand!

I could have easily picked Tohru Honda (Fruba), but I write about her a lot. I thought it would prove a great deal more fun to compile a handfull of great one-off anime quotes instead. So, without further ado… 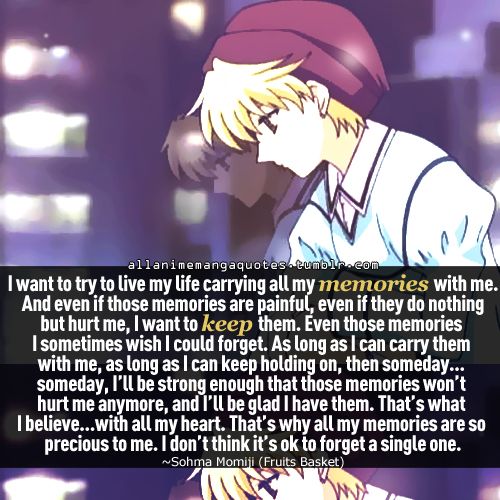 When does Roy Mustang say “Can you really hold the woman you love with your blood-stained hands?” Is it in FMA? I must know this…

Until next time (read: a few hours from now),

Eren Jaeger, who taught me about the nature of humanity. He taught me that perseverance, determination, nerve, and grit mean just as much as inborn ability.

He taught me that even the best of us fail under pressure.

He taught me that it is possible to loose yourself in the heat of the moment with no guarantee of recovery lacking consequence.

He taught me that making decisions means making mistakes.

He taught me that using your best judgement isn’t something to be ashamed of even at the worst of times.

He taught me that trusting others isn’t always the right answer.

He taught me that holding your own sometimes means holding onto something greater.

This post is late because Attack on Titan has moved me.

No spoilers for season 2, please.