We’re on our way back from our anniversary trip to Chicago. As part of that trip, we visited the Field Museum, and at the Field Museum we saw (amongst many other things) a gemological exhibit.

My brain 🧠 immediately whiplashed into Sailor Moon Mode (TM), and things only got worse from there:

Before I know it, I’m scouring the display for Sailor Moon characters, but that’s neither here nor there. I don’t know why Naoko Takeuchi chose to name her characters (both good and bad) after gems, but it was a smart move. And this whole affair got me thinking about a great villain ship that, at this point, I probably don’t need to introduce.

But how many villains do I actually ship with their fellows and with their non-villain counterparts? I’d never actually considered it before. Thus, this article is born! I had originally planned on including villain ships from multiple franchises here, but instead, I think I’ll focus on Sailor Moon and save the rest for another day. Without further fare, so begins a reflection.

We’ll start with the pairing that began it all—Zoisite and Kunzite. Let me pull a Bernie Sanders and make it very clear; I don’t care about the relationships these characters had in the manga with the inner sailor scouts. I don’t care if this was anime-only. These two are a SHIP 🛳. Like, they have sailed, and they aren’t coming back to port, guys.

They are such a notable, casual approach to same-sex couple depiction, especially for the 90s. They go about themselves, and clearly love each other. And honestly, I don’t like their coupling for that reason specifically, but it’s worth mentioning.

I watched the dub as a kid that turned Zoisite as a woman, and finding out much later that “she” is actually a “he” was shocking at the time. (This is the same dub that turned Neptune and Uranus into cousins instead of lovers sooo no big surprises there.) And even as a kid, it was so clear how much they mattered to each other. 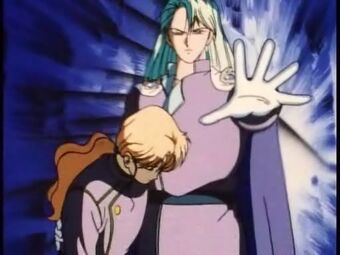 They’re evil, yes, but what are their motivations? What are their actions hinting at that might run deeper than their orders? Where are their hearts? I’m not spoiling anything for those of you who want to go back and take a refresher course in their romance. I mean, hey, I’m going to do so once Husband and I get home today. Because I need a good cry today, right?

I mean, “Zoisite, guide me to the world where your soul drifts” ???? True love, guys.

The original Sailor Moon Anime was surprisingly good at tugging the heartstrings. We’ll touch more on that with our next half-villain couple: Molly (or “Naru”) and Nephrite.

Okay, I know Molly is like 14, so for my sanity, Nephrite is a teenager. That’s how it is. He’s a teen. I can’t find anywhere it gives him a specific age, and it makes sense that he would be, so it’s official. He is.

Molly is totally into the guys, but Again, she’s a teenage girl, and it really isn’t any surprise. (I mean, I was a teenage girl once. I get it.) What’s most interesting about this ship is Nephrite’s particular (and fairly short) redemption arc.

Until the very end, he’s well-and-truly evil while at the same time obviously acting on his feelings for Molly. Does he use her to get to Sailor Moon? Yes. Does he stop his attack on Sailor Moon to run to Molly’s aid when she’s in trouble (after having SENSED as much just from Molly’s thoughts because he’s so in tune with her)? Also yes! He himself doesn’t understand his feelings for her, and he denies them to his fellows, yet he saves her. He laughs with her. He protects her (spoiler because I HAVE TO) at the cost of his own life.

Even though this post founds its inspiration and beginnings in Sailor Moon, my reflection can’t end there. I’m going to have to be more observant about the villains I ship. I think I’ll put out a headcannon post in the near future as well.

What really deserves a look are the general relationships in Sailor Moon that proved tragic. Because there are a lot of them. (Saphir and Demande, I’m looking at you.)

Did these ships break you like they broke me? Let me know in the comments below! And, you know, if you find any well-written, clean fanfics, lemme know about those too? :p

Impromptu photo shoot 📸
I was sitting on my kitchen floor in a sun spot yesterday because the boys have the right idea, when he joined me 🥰💕☀️
My husband got the perfect angle yesterday of two wonderful boys in a sun spot 🥰🥰🥰🥰☀️☀️☀️☀️
Happy Easter!! ✝️⛪️🎶💕May you always know how unconditionally loved you are in the eyes of our Lord and Savior! <3
He sleep and I sleep and we sleep 💤
The renovation is happening, and the boys are very interested in this new thing <3