I wanted so badly to attempt this challenge, but then life happened. And then I forgot about it. ¯\_(ツ)_/¯ And now, whilst making my return to blogging with a proficient laptop, I’ve remembered it again! It’s like an (almost) birthday present to me! (Though by the time this post goes out, my birthday will have passed.) Plus, it’s been a while since the fad hit, so maybe everyone needs another dose of ikimen, right? Right. And, luckily, I’ve also since stumbled across all KINDS of new characters for this build-a-harem challenge! Thank you, Hazelyn, for nominating me! Let’s begin!

The ‘Build A Harem’ Tag Rules:

Okay, so in no particular order, I’m starting this list off right with an up-and-coming favorite of mine from Rage of Bahamut: Virgin Soul. Please, everybody give it up for…

Okay, so episode 1 spoilers ahoy, but I can honestly say that from the moment I saw him dressed as who I’ve now dubbed “the pale guy,” I was all about Azazel (or, as I sometimes call him for brevity in my watch alongs, Az). THEN he turned out to be “bandage guy” (or “rag demon,” whatever), and that just took it to a WHOLE NEW LEVEL of “damn, son.” (Pardon my French.) And the worse part is that I KNOW what this says about my taste in men. I didn’t want to find him attractive, but how could I NOT?? And I’m not about to sorting these guys because I like who I like in my reverse-harem regardless of trope, but good night, he screams tsundere if anything. I am all agog.

Az is that emo/goth guy who’s dark, broody, dangerous, and a bit misunderstood. He’s the “bad boy” without trying who still takes himself just the right amount of serious. He’s driven, determined, and—lets be honest—sexy, omgosh. But Ginger would make fun of me so hard for this, guys, because he’s so my type, and I don’t even WANT him to be my type, you know? He’s gonna take care of you, AND he’s gonna take care of anyone who’d ever try to hurt you. His relationship with Mugaro somehow so tender and sweet, like they’re brothers and Az has to look out for Mugaro, with Mugaro sometimes stepping in to save Az from himself as well.

Phew. This is all just too much for me. Moving on before I really start to fangirl…

Speaking of types, I took one of those silly Facebook quizzes today that espouses it can tell you “type” in men based on your food preferences. “Haha,” I thought, “I’ve just finished bemoaning that I can never escape ‘my type,’ so why don’t I take this silly quiz and watch it get everything wrong.” Then, this happened: 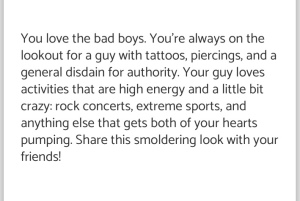 Yeah, I like none of those extreme sport things, but I do like misunderstood bad boys. And so they might have missed the demon/vampire/emo portion, but hey, pretty close, yeah? How they got as much as they did from the fact that I like to eat fried chicken and mashed potatoes, I’ll never guess. Speaking of, we all knew that I wouldn’t get through this without including someone from Hakuouki, because if I were to try and do so it would feel like I’d betrayed my own constitution, and that’s just not right, folks! So, even though you’ve heard me rant about this title in the past, for this go-around, I’m going to pick another demon who caught my eye…

Kyo is a demon who doesn’t despise humanity, necessarily, mostly due to the influence of a dude named (and I’m going to spell this wrong) Takasugi. Minor spoilers, of course, but when Takasugi died, Kyo decided to carry on in his stead and work toward the future that Takasugi wanted, even if it wasn’t becoming of him as a demon (not that the outlier has ever cared much about that, mind). While this is going on, he meets Harada, and the two strike up an unlikely… while I wouldn’t call it friendship, perhaps “mutual respect” would phrase it nicely. He even says at one point that Harada reminds him of Takasugi, implying just how must respect he has for the Shinsengumi warrior. Their relationship is full of banter, and I do feel like they would have been friends outright in another life. So, in the life of this harem, I’m making that a possibility.

Shiranui Kyo is going to do what he thinks is right, and he’s going to raise a middle finger to authority doing so. I’d call him a “bad boy,” but I honestly don’t think he cares enough to be one. He’s just… him. And he’d be the guy to tease you mercilessly expecting to get back just a good as he gave. (And you can ask Husband, I’m a sucker for that.) I think he’d make an excellent addition to this harem.

Oh, who am I kidding? If I keep picking men with these personalities, they’re liable to kill each other…

As much as I wanted to keep this harem build entirely comprised of demons, it just wasn’t realistic not to include a certain someone from Fullmetal Alchemist Brotherhood who appeals to me on many levels. Every harem needs a childhood friend, or so I’ve been told. Maybe. Point is, if there’s gotta be one, I guess it’s gonna be…

I’ve written extensively about the appeal of Roy Mustang. He’s totally a bad boy in that “working from within the system to circumvent authority for the greater good” kind of way.

FMA made Roy into a much less attractive (though no less impactful) character, in my opinion, so the Roy named today is that of FMAB notoriety. And I’ll admit it; aside from his nobility, determination, and loyalty, he’s also plain sexy. But why? Well, his Xingese features, attractive build, and smirk do him all kinds of favors physically, but he’s also smart, loyal, so very determined, and powerful. He’s so very capable. And his utter commitment to Riza?? THE ULTIMATE SHIPPPPPPPhgbn;souigbhaes'[roa’hoidfv’ho;ihg;aiugdhvb’ds;vish 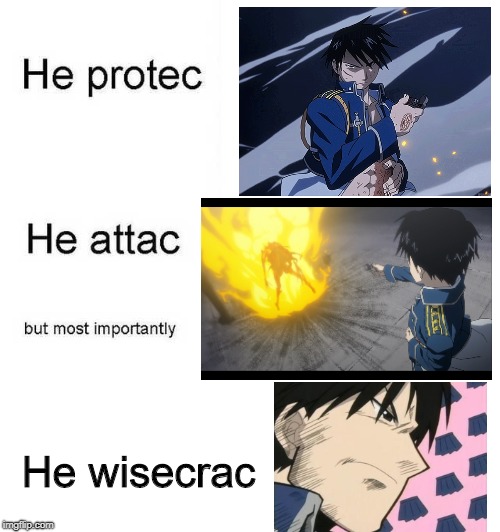 Oh, look, another demon. I promise I’m not targeting them specifically. (I gave that up with Mustang!) This member of the harem comes from a show I highly recommend called The Betrayal Knows My Name. Frankly, it doesn’t get nearly enough attention. If you like reincarnated lovers, angst, angels and demons, complicated relationships and/or misunderstood emo men, it is definitely for you.

The Uraboku anime leaves a lot to be desired when it comes to explaining Luka’s backstory, and without spoiling the manga, I can’t say too much else. I can mention he’s a powerful demon wholly dedicated to the soul of a woman with a sort of love that transcends even romance. You’d be hard pressed to find a more loyal character than Luka.

He’s tortured by what was even as he sacrifices everything to protect what IS, and he does so all for love. Aside from this, his whole demon aesthetic is just too much for my heart to handle.

I just want to hug him.

If I include too many demons, are you all going to start looking at me funny? I guess it’s too late to be helped now.  Let’s just surround Roy by demons because I can’t get out of my head how amazing, weird, and oddly specific this reverse-harem is going to be.

I’m going to quote a former post of mine, because I really do believe that I can sum up the appeal of Sebastian no better way:

To my current knowledge of both the anime and manga, Sebastian is thoroughly evil incarnate, but he retains a likable, appealing character; he is suave, handsome, charming, and oh so powerful; he’s obedient, until we’re suddenly reminded that he is NOT, in fact, what his human exterior would have us believe.

At the same time, he’s dedicated, loyal, and never tells an outright lie. He gives his all for his aesthetic, and he never offers any delusions regarding the true nature of what he is.

I think that’s the point of it all, really. Yana Toboso achieves in creating Sebastian what I hope was her ending message all along; evil is misleading, tempting, seductive.

Evil is hard to resist.

The creator was so smart in designing a character like Sebby-chan.

I just just IMAGINE this aesthetic. Shiranui makes wisecracking quips as Azazel looses his temper over something Sebastian smirkingly said. Luka stands just off to the side looking into the distance, entirely unmoved, as Roy fustratedly tries and fails to bring the assemblage to some sort of order.

Before I sign off for today, it’s bonus time! So, the thing about husbandos is that none of them take the place of IRL Husband. ❤ In that spirit, I’ve got a surprise to share! I couldn’t get Husband to opt into the idea of creating a harem of his own (darn!), but I am going to share his waifu… Are you ready!?

Anyway, that’s all for now. Until next time, keep on keeping on.