Because in giving his life to the Aizu, Yukimura became the antithesis between what he wanted most desperately but knew he’d never have.

Even after all this time, when he closes his eyes, she is there.

When he closes his eyes, he’s standing beneath the sakura, an overwrought tree weeping petals for the one he’ll leave behind. “Yukimura,” Saito thinks, “human woman and demon girl.”

A walking, smiling, blushing contradiction, the once hostage was antithetical at the best of times and a conundrum at the worst.

At their first true introduction (if one didn’t count a rather hasty membership… dispatch… in the alley), he threw her to the floor and espoused her most probable doom. At goodbye, he gazed longingly into the clouds, giving every impression he’d like to be on his way, and yet…

…that overlooked everything that came between. It overlooked snow bunnies and patrol routes and nights spent guarding her room from within shadows too dark for the eye to penetrate.

It overlooked what has to be love, Saito surmises. Because if it was not love, for what had he forsaken all logic?

Yukimura holds his hand so gently, but she bites her lip fiercely as she struggles not to cry. She blushes prettily when he holds her, and yet initiates first contact. She insists he call her “Chizuru,” and conveniently forgets his preference for a murmured “Hajime-kun.” She cannot fight a fever, but her bodily wounds heal without hesitation, and the soft-spoken girl can correct misbehavior with a single glare.

To think he’d almost lost this woman, had overlooked love until it was almost too late.

He had nearly sent her on with Hijikata to Sendai. He had nearly claimed her a nuisance and forced her on her way, heart be damned.

Because in giving his life to the Aizu, Yukimura became the antithesis between what he wanted most desperately but knew he’d never have.

Contradictions: logic and love, strength and fragility—these things he considered so long ago when leaving the Shinsengumi on a mission of espionage. These things he debated beneath the Sakura tree, they were notions unchanging and running parallel through his very existence. How could, he wondered as he looked at her, those things most fleeting feel the most real?

But when he opens his eyes again, even after all this time, she is still there, and he finally understands.

“Chizuru, you should be inside. You will catch cold.” Saito subtly leans closer, and he can see the raised gooseflesh on her neck. His proximity triggers her gentle flushing, or perhaps it’s just the weather, but he cannot allow her to stay outdoors in these conditions.

“I will be alright, Hajime. I merely wish to look at the snow with you.”

Admittedly, something in that pleases him, and so he wraps an arm around her and holds her close in the bitter cold. They gaze upward at the snow raining down like cherry blossoms out of season.

“Time passes, and many things change. It is the unchanging things in which I believe.” For some time he has known that she is of these, the contradictory woman to whom goodbye held no sway. 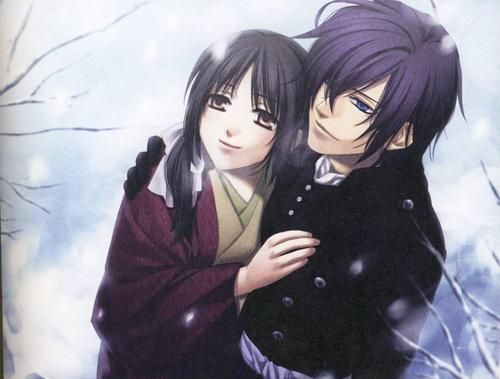