Instead of “Fight! Intense! Be dynamic!” from the first Dragon Ball Super OP, “Touken Ranbu Hanamaru” is running through my head to the former’s tune. Take that as you will, because I don’t even know what it means, but I fully embrace that TOUKEN RANBU HANAMARU just won’t leave me be!

So… having digested the weirdness you’re about to dive into (because Shoujo wrote this article, and you can already tell you’re getting in over your head with Miss Random, over here), you might wonder, “Wait, Touken Ranbu…people mentioned that this winter. What is that again? ”

The first of two very distinct, very different anime based on a niche card collecting game called “Touken Ranbu,” Touken Ranbu Hanamaru (2016)—hereafter called Hanamaruand in contrast to Katsugeki/Touken Ranbu (2017)—focuses on human reincarnations of historical swords that battle against the Time Retrograde Army which seeks to alter the past! However, rather than being action-centered like Katsugeki/Touken Ranbu, our now dear Hanamarufocuses on their daily lives at the citadel in which they live. ❤

Hanamaru saw its second season air beginning in winter, and it continues presently; I started watching season 1 on a whim (I seem to do a lot of things on whims, right?) because I noticed it on Funimation Now, and I’m hooked! I marathon-watched the whole first season in a few days before realizing how lucky I was that season 2 had coincidentally JUST ARRIVED on screen!* Even as someone who doesn’t watch anime seasonally, I have been keeping up with the releases every Tuesday! ❤

Each episode’s synopsis sounds like something that would be incredibly boring even to the point that I go, “I don’t think that I want to watch this.” But then I end up watching it, and each time I am completely engrossed. It’s like a magic spell or something takes hold of me as I find myself laughing at their hi-jinx and holding my breath at their daily dramas. Watching this series unfold has me so enamored, and it has been quite the educational experience because now I can at least /sort of/ understand the concept behind “Cute Girls Doing Cute Things” as a genre.

The series features MANY sword boys, with subtly primary focus on “brothers” Yamatonokami Yasusada and Kashuu Kiyomitsu above, both swords once belonging to Okita Souji of Shinsengumi renown. Without getting into spoilers, I can’t say much besides that these swords, like the rest of the citadel’s ever-increasing populous, have to deal with some struggles relating to their past lives and ownership; these two might just have… a harder time doing so… than the others…

Each character brings something different to the cast, and their personalities compliment/clash in the best ways; I am almost always in hysterics as I watch. It’s the best! Additionally, the art is sweet and lovely, the colors naturally bright, and the character design unique. Several of our sword boys (especially the younger ones–or “short swords/wakizashi”—ISN’T THAT JUST SO CUTE!?—They’re all DIFFERENT AGES AS A CONSEQUENCE OF DESIGN—GAH) appear VERY…um…feminine. My husband couldn’t believe that some of the characters on screen were truly boys when I told him (it didn’t help that they were voiced by girls, tbh), and it had us both guffawing as we jokingly argued back and forth…

And the show is self-aware enough to even make fun of this on its own, with one character confusing the other for a girl and—upon being told the truth of the matter—lamenting that this was REALLY going to get confusing….

While the show is primarily light-hearted, it does include enough mild angst and drama to appease, and its characters are fleshed out to be both memorable and distinct.

There isn’t much more to say on the subject if I want to avoid spoilers. I DO want to point out that the show has turned into an impromptu cooking-themed musical not once, but ONCE PER SEASON, and that’s been exceptional/hilarious. Furthermore, I have only seen one episode of Katsugeki/Touken Ranbu, and while it is substantially different than Hanamaru, I enjoyed it well enough and plan to watch more before writing a comparison post between the two titles. ❤

I am livin’ la vida sword boys, and I’m never going back.

You can watch the episodes Simuldubed on Funimation here.

Have you been watching Touken Ranbu Hanamaru? What do you think? Let me know!

*Something incredibly similar happened when I watched Attack on Titan.

Here’s a picture I stumbled across that I thought was really funny because I know that people frequently ship the boys in sports anime even when there isn’t any evidence to support the ship, much less when there IS—then LOOK OUT BECAUSE WE WERE BORN TO SHIP VICTURRI.

(But I also don’t intend to offend anyone by suggesting that shows have/need a “gay rating.” Just saying. Really, it should represent the MCs ship-ability period.) 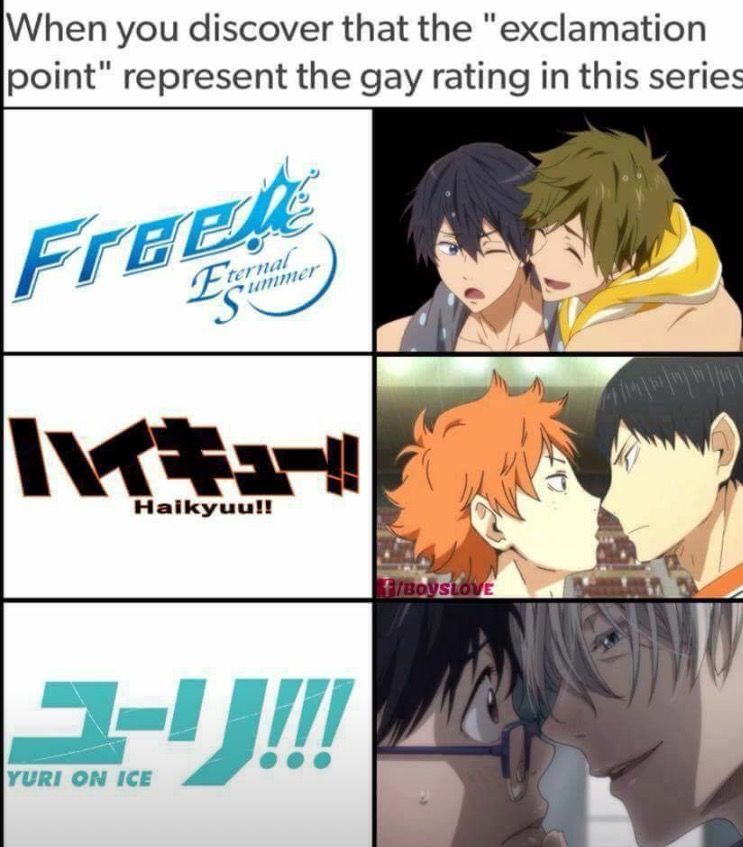