Let me begin with a bit of backstory.

My husband is a gamer, like hard core. The man is devoted to his WoW raid nights and spent hours laughing and screaming in high pitches playing PUBG. He had a gaming PC built for himself in high school; and upgraded his system last year (read: built a new computer). As such, I got his old model, and I found myself really enjoying having a desktop. It ran everything I needed it to run, played the few games that I play, and worked with such speed that browsing was a breeze. And I was using his old, wired gaming headset for quite a while, until its mic broke. Then I found myself speaking into his slightly-less-old wireless headset’s speaker while listening out of the wired ones. And I decided then, folks, that is was  finally time for an upgrade.

It took me a while to decide on what I wanted, but I knew I required something comfortable. Preferably wireless after getting over my ?irrational? (dear Lord, please, please be irrational) fear of brain cancer from Bluetooth technology and seeing how much Husband liked utilizing his own headset. Of course, me being me, I also wanted something unique and, dare I say it, maybe even *cute* if I could swing it. Something that reflected a bit of personality! Could it be pink!?

A few (two?) years ago around Christmas time, my husband and I stumbled upon the Brookstone Wired Cat Ear Headphones. They were wired, had cat-ears that doubled as speakers, and lit up in one of several colors.

They seemed really cool, and apparently Husband even thought about getting them for me that year, but upon reading the less-than-stellar reviews of the time, he opted out of that plan.

Well, this time around, before I could make a decision, my mother-in-law actually got the exact same wired version for me for my birthday a few months ago. It was incredibly kind of her, and I really appreciated the gesture. Their lighted purple ears made me feel super techno, and while not amazingly girly, they had enough of that kitty-neko-chan factor that I was quite pleased.

But they were also a bit heavy. And they also didn’t work right out of the box. 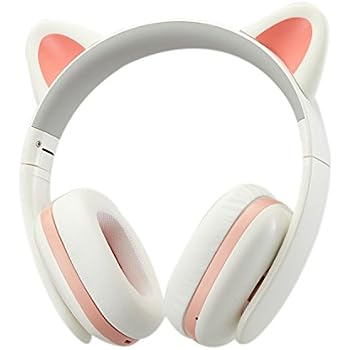 The reviews were very promising, so I ordered them, and upon arrival, I was again taken with just how cuuuuuuuuuuuuuuuuuute they were! I mean, look at that packaging!

They’re much girlier than the Brookstones, and their lil baby ears just make the whole look! ❤ Plus, you will supposedly be able to swap them out for bunny ears if you’d like a change (soon to be sold separately). You can also remove the ears if you’d like to go more low-key (but why would you!?).

The headset itself is designed not to pull your hair. Though I purchased the pink/white wireless version, they are also available as a wired AND/OR black and red set. They fold into a d-shape for ease of transportation/storage. While the ears are easily removable, they remain firmly in place and are unlikely to fall out though everyday use.

While the Censi lacks the Brookstone’s external speakers and lights for a comparable price, it seems they funneled that additional money into making sure the headphones actually work. And they’re lighter on my head!

The set that I have also works as a wired set if I so desire, so in the case of my desktop computer, I can simply plug it in and it will draw power from my PC. You can’t use them as they charge though an outlet, but hey, that’s life.

The cons of the set prove to be its pairing capabilities and its physical tightness. While it DOES pair with my PS Vita (YES!!) and with my iPhone, it’s a bit tricky to get the Censi device recognized from time to time and requires a bit of finagling (read: make the device you want to listen to “forget” your headset and then reconnect) if you want to, say, use it on your phone again after using it on your Vita for a time. Inconvenient? Yes. Deal-breaker? No.

Additionally, I will readily admit that I have a petite face and itty-bitty ears (but this is so legit a thing and when people notice they go, “whoa.”). Keeping that in mind, these headphones are a bit tight on me. They’re also on-the-ear rather than over-the-ear (or would be if my ears weren’t so tiny), so no earnings while you wear them.

It probably won’t bother some, but I’m used to Husband’s over-the-ear headsets that slip off my head if I look down, and those are what I find most comfortable, so…

I mean, I’m wearing my Censi now and I don’t think they’re squishing my brain.

But I can definitely feel them. They exist. They’re mildly noise canceling. They are present. They are staying on my head when I look down.

When you first turn them on, the cutest little Chinese voice greets you, and then they “bloop!” to life. Something similar happens when you power them down. The sound quality (to someone like me who is admittedly inexpert) seems great! All in all, I feel like this was a very worth while purchase, and I think—being as indecisive as I admittedly am—I’d make it again. They feel like headphones that are very “me,” and that makes me smile a silly little smile. ( ˙꒳​˙ )

I still haven’t reviewed my PS Vita (SO WORTH THE PURCHASE), but that’s life. Hopefully I’ll get on that soon!