I hold her hand, so small, in mine.

As our fingers intertwine, as her thick hair tangles in the crook of my neck, as her tears fall silently, one hand gripping tightly my yukata…

her lips even now refusing to say my given name, too much even as she’s shaking…

Only now do I finally understand.

Her love is thicker than Kyoto smoke.

This girl is more a woman than I’d dreamed—that’s not to say I’d entertained the notion, yet

her eyes that night, they flickered in the fire light, casting longing shadows that I couldn’t overlook if I’d wanted, and I…

…I thought I might consider it real enough to try…

if she’d had those eyes for me.

summed up in compulsion: one tick, sword swiped clean and sheathed.

She is sakura blossoms in snow, and I am a shadow on the mountain

of Shinsengumi glory. These things I do not take for granted. 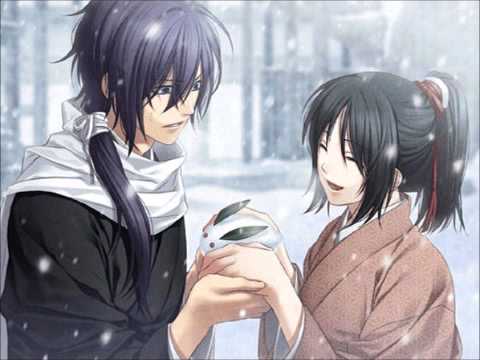 My heart has never raced for anything but the kill, and yet

I’ve been called a kid so many times,

and I feel it

when she looks at me.

A sacred thing I can’t help but admire,

she smiles with sparkling eyes

like a fever dream I had when I was small.

Am I too young for this? I thought I’d hate to say it, but…

She is the means to an end

An omnipresent blinder, a puzzle in the eyes of flawless research

—An impression on bloodly Okita—

—An impertinence to Hijikata—

A dictation on MY heart

Words spoken with the sweetest hint of bitter goya

And the gall only a young, plucky girl in men’s clothing can deliver!

Who is she—SHE!—to make me—I, who have given up HUMANITY—feel so…

I feel like I’m sending my only son to fight a war,

Or my only daughter to her wedding.

Or maybe a butterfly into a spider’s web or a rabbit into a fox’s den, but you get the picture

And I know that Sano doesn’t look at her that way, but I’ve seen Heisuke’s eyes, that kid

In keeping with a theme, I’m not as oblivious as some might say,

But I’ll choose this labeled ignorance for a reason:

Give me fifteen minutes with a geisha and I’ll make it count,

But a lifetime well spent isn’t long enough to spend with her.

I’ll take this role with pride, old man jokes aside—

Chizuru is a treasure; only certain men—my pals—are good enough.