DUDE. I SHIP EVERYONE. UNFAIR.

Now, in all seriousness, I could get deeply invested into examining my own feelings and the shows that I’ve seen to best ascertain a thoughtful answer to this prompt, but~~~ I could also just…
Nah, okay, okay, I will be serious. How about this? I will explain my reasoning behind two anime couples that truly I adore together, and then begin listing other pairs that I ship just for the hell of listing and my own indecisiveness. Sound good?

Though I ship these people with certainty, there are some fascinating relationships that defy definite shipping for reasons of depth, realism, or fate. (Example: Yukari x George from “Paradise Kiss”)

Final Disclaimer: This is not necessarily a complete listing of my ships. You can’t ask me to be so final about an ever-growing list, and I ship so many people that I must narrow this down a little bit for the sake of brevity.

Moving on, we begin! The following are some really great ships!

Shirayuki and Zen from “Snow White with the Red Hair” are a wonderful couple. They complement each other and support one another without needing to revolve their lives around their relationship at the expense of everything else. They encourage each other to reach their goals and decide their own destinies while enjoying their time together and living in the moment. They care for each other, but they understand that as much, while important, can’t be the end-all-be-all in their lives right now (or perhaps ever) due to their circumstances and Zen’s station. Shirayuki understands Zen’s obligations and supports him whole heartedly, while Zen encourages and appreciates Shirayuki’s support and independence while still striving to protect her behind the scenes as needed. Neither treat the other as incompetent, and it’s probably one of the healthiest examples of a relationship that I’ve found in shoujo. Shirayuki is not a damsel in distress, and Zen is a prince who will protect her if necessary but ultimately trusts her capability. Shirayuki protects Zen; Zen protects Shirayuki. She loves him not because he is a prince, but because she respects his character. He loves her because of who she is, and because she sees him as Zen first and a prince second.

Their relationship construed in quotes:

“I suppose you’re right. Zen will always be a prince and there will always be rules he’ll have to follow. But that doesn’t matter. I still have to try to do the right thing here, no matter what it might cost me…You’re wrong [about me having no power]. True human value can’t be measured by social status. It’s measured by one’s depth of character.”

Shirayuki: Zen, I think I’m in love with you. I’ve always cared about you and had so much respect for the person you are. I thought I just wanted to be there for you. But now I know it’s more than being your friend. It…it scares me. I can’t act like things are the same as they’ve been between us. This is so much bigger than anything I’ve ever felt before. It almost hurts and I don’t know what to do with it.

Zen: You’re right, it’s different now. Shirayuki, my title might not always be able to protect you. In fact, it might make life harder for us sometimes. The truth is, situations will arise where I am forced to choose my duty over you. It’s inevitable, and I need you to understand that in the beginning. I don’t care that it might not be easy though. Together, we can weather the storms. You give me that faith. I swear I will protect you and what we have with my life. It may seem strange, but I’ll need your help, too. You inspire me like no one I’ve met. You are my strength; I think you’re my destiny. So tell me; if I reach out my hand, Shirayuki, will you take it?

Misa and Usui from “Maid-sama!” have got a crazy interesting vibe. While I’m less in love with the coupling in comparison to Zen x Shirayuki, it’s easy to see that the two listed here compliment each other well. “Baka” Usui supports Misa, but there’s more humor there. Misa’s fiery attitude and determination sparks and holds Usui’s interest (and, let’s be real, I’m pretty sure she’s the only girl he’s really interested in at all because she’s her) while Usui’s determination and teasing nature appeals to Misa even if she isn’t ready to admit it to herself.  Usui maintains, even without telling her (for she’d surely disagree on principle), that a good, strong woman like Misa can stand a lot taller with the help of a good man behind her. She’s smart and able, but he feels that she still requires some protection, and he will do said protecting behind the scenes (for the most part). Misa maintains her pride. Usui maintains his bad ass image. The two quickly become known as a tag team. It’s excellent. (And I totally think Usui’s maid fetish is real, by the way.*)

There relationship constructed in (sleepy on Misa’s part) quotes:

Usui: Miss President, I…you’re the one person I would never want to hate me.

Misa: Huh. There you go again. You’re always makin’ fun of me. You really piss me off, you know that? Huh. But I’m…I’m so grateful to you. I wonder if I’ll…forget about that, too. Gratitude for the sports festival, for me at [name], and the school festival. Mmm. Still haven’t repaid you, for everything. For all the things you’ve done for me.

Usui: Hmmm. That’s fine. Even if you never repay me, I’ll help you whenever you need. And I will make you fall in love with me over and over again. Just leave it to your “master.” 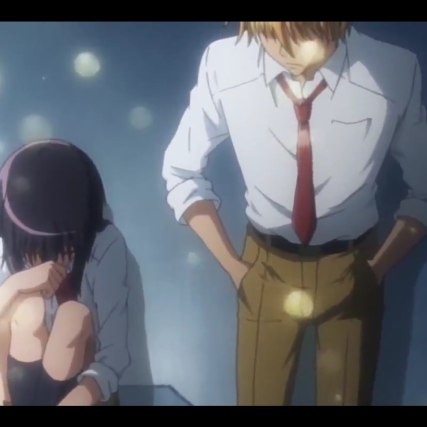 Other couples I ship include…

Kiss Him, Not Me!: Kae x Sleepy Guy

So, what do you think about these anime couples? Who do you ship?