Nanami is lively. She has a big heart and operates with determination. Look out, Tomoe; you’re not going to be able to walk over this spirited spitball. (I have NO idea why that term popped out of my brain, but there you go, Internet.) She’s feisty and fun; there are a million and one things to like about Nanami, but more than perhaps anything, I love how she handles herself in less-than-idea situations. This quality manifests itself in various ways. She grew into a fine young woman, cares about other with such total abandon, and almost always has a ready smile for someone who needs it; all this is true, even though she lost her greatest role model at such a tender age.

I also greatly admire how she prioritizes what needs to be done that she might maintain her relationships, and does so with such strength. *spoilers ahead* Tomoe doesn’t return her affections right away, but she doesn’t pull that angst-y teen “Lovely Complex” BS in which she just LOOSES HER MIND for like a bazillion episodes and revolves the meaning of her life around him. (I mean, it’s not like I wasn’t a teen once, but I don’t care to relive it, thank you very much—I like my heroines more mature than that.) Instead, she’s understandably upset and down for a few episodes, and then she proceeds to deal with her unrequited feelings like a total boss; she doesn’t let it mess up their master-familiar relationship. It doesn’t ruin their friendship. She keeps on keeping on, neither “giving up” nor forcing herself on him. The best quote to summarize this tendency is when Nanami says with a smile, “But, it’s okay. I get this is one sided. You don’t have the same kind of feelings for me, and that’s totally fine. I won’t freak out on you because I think I can change how you feel, and you don’t have to freak out on me.”

Nanami’s love is unrequited, but she doesn’t let it destroy her happiness. She feels what she feels, and she gets down about it sometimes, but she doesn’t psychologically annihilate herself over loving the tsun tsun yokai. She cares without restraint, and she sees the good in almost everyone. *spoilers over* Nanami’s top spot when it comes to my favorite female characters is well deserved.

With Tohru I can be brief. I say this not because her character is not wonderful–No, I can be brief because her character is so straight forward. Tohru, in summary, always sees the good. She is selfless, kind, loyal, and brave when she must be. She sees the person inside the physical shell and tries her hardest in every situation. She is innocent, honest, and pure. She’s an amazing role model. She lives her life being grateful of the things that she has; she appreciates others; she holds on to hope. She makes do. She doesn’t judge. She thrives in difficult situations. She isn’t academically gifted, but she’s insightful and grasps the heart of matters. She lives to help others and achieve a mother’s dream for her daughter. 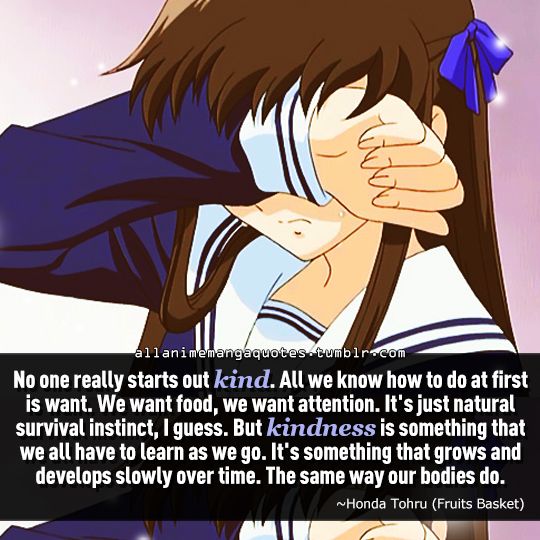 Who are your favorite female anime characters? Let me know in the comments below.